In preparation for the 2014  VALS  Program hosted by CCU this week, I wanted to {finally} post my notes from last year’s Program.

On April 24, 2014 the topic will be “The Future of the American Dream: Crisis or Confidence?” Go here to register or lean more: http://www.ccu.edu/vals/

This is Part Two in a Series of Posts from 2013 VALS Program hosted by Colorado Christian University.  The topics was The Moral Case For Free Enterprise – this information will assist anyone in articulating the necessity of preserving the greatest economic system that has ever existed on the earth. Go to the end of this post to access the other posts from this conference.

a system that enables us to attempt our dreams
photo from: www.youngupstarts.com

As a college student, Dr Richards wrested with the idea that if the essence of capitalism is greed, then as a Christian, he had a moral dilemma to deal with. He began exploring this and found several books that helped him come to terms with, and become an advocate for, free enterprise – Thomas Sowell’s book Marxism: Philosophy and Economics and The Road to Serfdom by Friedrich Hayek

He now defines an Entrepreneur as one who risks his own wealth, success, and reputation in anticipation of meeting human needs; therefore the entrepreneur is not the greedy miser that the Bible warns about. But this characterization is not one that is widely held in today’s popular culture, and was completely demonized in the Occupy Movements of 2012.*

Richards believes that the entrepreneur and the free enterprise system are easily dismissed as greedy because a person’s evaluation of free enterprise becomes distorted –  it becomes distorted when he applies his own moral intuitions with a ‘misunderstanding of the nature of wealth and free enterprise’. You see, economics has its own laws just like chemistry and physics that can be studied and learned – all of these laws are part of God’s created world that He has left it up to us to discover. Unfortunately,  it is this distorted view of free enterprise that leads many to perceive socialism as the Christian economic model.

His goal (accomplished through his book Money, Greed, and God: Why Capitalism Is the Solution and Not the Problem) is the application of true ethics with good economics. He shared three Myths that he debunks in his book:

This is the myth that it is more important to focus on the state of your heart than the outcome of your actions. Richards points out that because of the laws of economics, it does not matter what the motive or the intention is, the consequences will still play out among all groups affected by that action. His very disturbing example sites the unintended consequences of establishing international child labor laws, which most would agree on the surface, is a good idea. However a 1997 UNICEF study revealed that because children were forbidden from working in textile factories, they now turned to stone crushing, street hustling, and prostitution to bring in the money necessary to support their families. 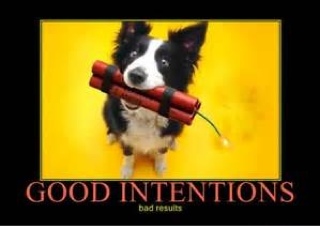 image from: norteno1.blogspot.com Look at this little guy – he just wants to play fetch!

This is the myth that if I get rich, then you have to get poor; or that there has to be a winner and a looser.  In free enterprise we do not operate on a win/loose system- it is a win/win. I have something you want; we agree to exchange my something for your something, and we are both happier as a result.

Richards gave us a clear example from his 6th grade class where his teacher implemented an experiment to illustrate this point. Each student was given a random trinket/toy. When asked to score how happy they were with their toy, she totalled up all of the figures and arrived at a number that she called the happiness quotient. The next part of the game was to allow all the children to exchange toys with someone in their row of seats, if they wanted to. Scores were totalled and the happiness quotient rose…without any new toys/items being added to the game/equation. The last step was to open up the exchange so that all students could trade with all other students. Scores were tallied and the happiness quotient rose exponentially higher, without any new or better toys being added to the game. The moral was obvious to all of us even before the anecdote was finished - free trade with as many people as possible, with as little restriction as possible resulted in a higher overall happiness quotient and a greater number of happy people!

This is the myth that wealth is not created, but merely transferred; the myth that there is a fixed amount of pie. I have heard this many times before, and it strikes me odd that anyone who has ever held a job or earned an allowance can buy into this myth. It’s like going into a bakery and fighting with every customer each time a pie is purchased because you think it is the last pie on earth…when the reality is that the free enterprise baker is in the back of the shop still baking more pies. Richards had a wonderful Biblical truth to tie all this together – imago dei – we are made in the image of God. Human beings were created to transform matter into resources, thereby creating wealth for ourselves and others. 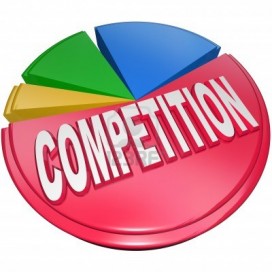 My summary of Richards points:

Capitalism is the Christian economic model that produces more happiness for more people. If we are truly following what the Bible teaches, then we will naturally heed the warning to be miserly and greedy, and we will take risks to transform matter into resources and provided win/win exchanges for society.

*Aside: Dr. Richards gave an account of a participant in the Occupy Movement who had a Masters Degree in Puppetry, but could not find a job. His inability to find a job as a puppeteer was an economic injustice that he wanted someone else to ‘pay for’.

On April 24, 2014 the topic will be “The Future of the American Dream: Crisis or Confidence?” Go here to register or lean more: http://www.ccu.edu/vals/